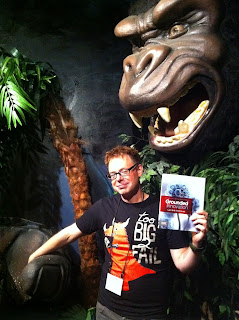 Grounded Innovation was officially launched on May 8 during the CHI 2012 conference in Austin, Texas! The event was hosted at the Museum of the Weird, a landmark Austin attraction which displays oddities from all over the world - freaks, monsters, mermaids, and much more! The author is pictured with King Kong, above (photo by Albrecht Schmidt). As added attractions we had the Pain-proof Man, who demonstrated how he could drive a nail into his own skull (and let a member of the audience pull it out!), and a fortuneteller to give essential advice about the future, digital or otherwise! The place was packed by an enthusiastic audience of CHI visitors and the book was also very well received at the Morgan Kaufmann booth at the conference.

You can also read more about it in the User Interface Engineering blog by Albrecht Schmidt, who was an important collaborator in several projects and features in the book!