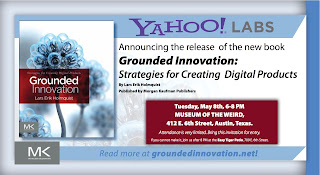 With the book officially out and in stock, it is time to go on the road! The main event is the official release party at the rather splendid Museum of the Weird in Austin, Texas on May 8 during the CHI 2012 conference - see invitation above!

Additionally, I am speaking at two university events in the upcoming weeks:
I hope to see you there! And if you want to book me for speaking engagements, feel free to contact me at larserik@yahoo-inc.com!
Upplagd av Lars Erik kl. 12:07 Inga kommentarer: 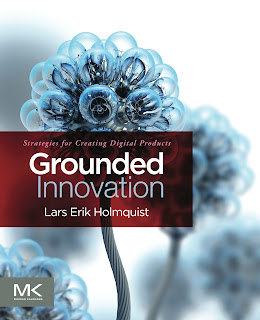 Ahead of schedule, the paperback edition of Grounded Innovation: Strategies for Creating Digital Products is now in stock at Amazon! Order it today! The Kindle edition will appear on May 15.
Upplagd av Lars Erik kl. 17:48 Inga kommentarer:

This year, I am chairing SIGGRAPH Mobile, a new program at SIGGRAPH 2012, the world's premier conference on computer graphics and interactive techniques. Mobile graphics is growing at an incredible speed, and we want you to share the latest exciting technologies in mobile graphics and apps! There are many different presentation formats to cater for all kinds of content, from industry, art, academia and beyond.

Read more about it in the SIGGRAPHITTI newsletter, or go straight to the Call for Participation to submit your work!
Upplagd av Lars Erik kl. 14:46 Inga kommentarer:

Tim O'Reilly on the future of mobile sensors

I highly recommend this conversation with Tim O'Reilly, originally published by Forbes! O'Reilly always has great insights, and his views on things like location (dis-)sevices, big data and the future of serendipity are well worth hearing.
Upplagd av Lars Erik kl. 12:58 Inga kommentarer: 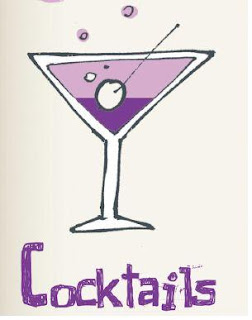 Several years ago, when we started the Mobile 2.0 project at the Mobile Life Centre in Sweden, I identified the web as the mobile platform of the future. This was before the HTML5 standard had started to become formulated - in fact, it was even before the iPhone and app craze that we are currently seeing! At that stage, mobile development was a total mess, with hundreds of competing phones and no unified channel for users to get access to mobile services. I argued that in the future, emerging web mobile standards will allow you to pull in hardware and sensing features like location, accelerometer and camera, and mix it up with online resources like authentication, maps and media. I called this the age of the mobile mash-up.
Today, many people agree with me that a large portion of mobile applications will in fact be web-based. But HTML5 alone, as impressive as it is, will not be enough to build interactive, cross-platform web apps. That is why Yahoo! has developed the Cocktails suite - a mix of technologies including HTTP, HTML5, Cascading Style Sheets, and JavaScript - that will allow developers to build cross-plattform web apps very quickly. Read the introduction by project leader Bruno Fernandez Ruin' to get an overview of the project, and delve into the Yahoo! Developer Network to find out how it can work for you (and check out other cool Yahoo! tools such as YUI at the same time!)
Various components of Cocktails will be released open source over a period of time, and the first one out the door is Mojito, released this week. This application framework allows developers to write client and server components in the same language (JavaScript), using the same framework. Even more interesting, Mojito applications can run both on the client (in the browser) and on the server (with Node.js). This means that Mojito-based applications can start running on one side (e.g. the server where the service resides) and migrate over to the other (e.g. the browser on the device you are using to access it) depending on the best combination of bandwidth and hardware capabilities. The result is a smoother and more responsive web experience from the get-go, which is already featured in Yahoo! applications such as Livestand.
In Grounded Innovation, the final chapter points to a future where new interactive services are released quick and easy and iterated fast on the mobile web, in a way that the current OS and app-centric world does not allow. It will also become possible to make personalized web services for a small number of users - what I call hyper-customization. As more and more platforms like Cocktails become available, and as the current app-centric mobile development community migrates to the web, I am confident we will see of these mobile mash-ups making a large impact on the world.
Upplagd av Lars Erik kl. 10:50 Inga kommentarer: 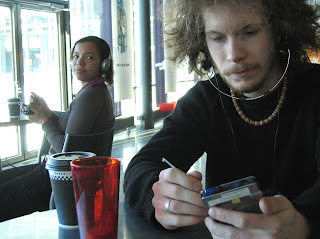 One area of location-awareness that has not been explored very much yet is recommendation systems. The current crop of apps - from Foursquare to Skout - lets you connect with people and places around you. But there is a lot more that could be done with all the data that is generated by local user activity. What if you could get recommendations for music, movies or apps based on the people you meet - even without asking them?

In 2005, we came up with Push!Music, which was developed by Mattias Jacobsson and Mattias Rost. My idea was to extend the ordinary portable music player (and remember, this was before the iPhone and iPod touch, so most MP3 players were very limited) to give it an awareness of the music that the people around you listen to - and use that to give you new music. We introduced the notion of "media agents", meaning that every single song in your collection was an intelligent agent, capable of knowing when you listened to it, if you skipped it over, and so on. Furthermore, the agents (i.e. songs) could use the local wireless network to peek into other players nearby - and if they thought they would be played more often there, they could "jump over" to another person's player! This meant that while you were listening to your own music, songs from other users nearby could decide to come to you and insert themselves into your playlist! You would literally get new music not from some abstract recommendation engine on the internet, but from people you passed on the street, rode the bus with, or shared office space with - whether you knew them or not. 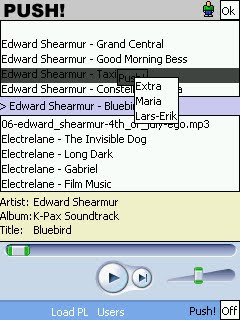 This system was implemented on handheld computers, and my student Maria Håkansson performed a number of studies on Push!Music with up to 10 users over several weeks. One interesting addition to the original idea was the capacity to manually send - or "push" - music to other users. This came out of the observation that people find it just as much fun to recommend music to others as to receive recommendations. So what happened? It turned out that people enjoyed getting recommendations from people around them - it felt "more alive" as one user put it. But Maria also found that people were very reluctant initiate contacts in the real world, even though they had been sharing music and were in the same location - this observation still holds for the many location-based "contact initiator" apps we are seeing today. Finally, an interesting issue arose around the sending and receiving of songs. Getting a song felt like a "gift", and when you receive a gift the polite thing is to thank the giver and tell her what you though - but we had failed to include such a capacity. This made users hesitate to send songs manually, because they did not know what the user would think, and had no way of finding out. However, the automatic recommendations - done by the media agents - carried no such obligation! Therefore, users really enjoyed sharing songs automatically the system - it was both from "real" people around them, while at the same time not introducing the awkwardness of the gift giving. (These are lessons that Microsoft could have used a few years later, when they introduced a similar manual sharing capability in their ill-fated Zune music player.) You can read more about the study in the paper Gifts from friends and strangers: A study of mobile music sharing.

Today, people are sharing media in close circles through apps like Path and Instagram, but I believe there is still a lot of room for recommendation-based systems based on the people around you. Wouldn't it be cool, for instance, if you could see what movies your neighbor was watching on their tablet (provided they allowed you, of course) and get it to your own device, maybe even start a conversation around it? Or if you could share music recommendations with the people in the bus on the way to work in the morning? As technology advances, I am sure we will see a lot more happening in this space!
Upplagd av Lars Erik kl. 11:36 Inga kommentarer: 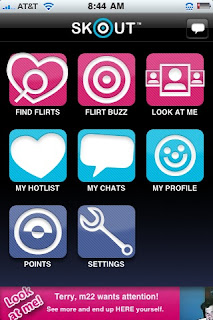 In the previous post I talked about the many location-aware services that have been introduced recently, and why the do not seem to get much traction. One happy exception seems to be Skout, which started out as a general location service but morphed into a youth-oriented dating/flirting app. Skout just received a $22 million round of funding, which indicates that the race in location is far from over! One unique aspect of Skout is how they make money - not from the advertisement or coupons that many others are targeting, but from in-app purchases of gifts, avatars, etc. Furthermore, by focusing on a particular demographic and domain they seem to have gained traction where many other, more general-purpose location apps have failed. After overcoming their rough patch, Skout now claims to be growing with 1 million users per month - the same rate as Foursquare! And of course, even though the company is based here in Silicon Valley, I am particularly happy in the knowledge that the founders, Christian Wiklund and Niklas Lindström are Swedish, just like me!
Upplagd av Lars Erik kl. 11:21 Inga kommentarer: