Ambient Awareness - still not quite ready for primetime 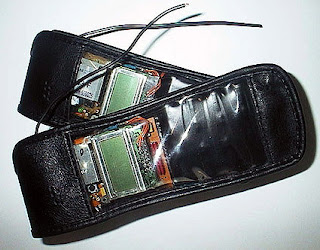 I just returned from the South By South West Interactive festival in Austin, where I was reminded of one of my earliest research projects. The Hummingbird (above), presented in 1998 and developed together with Jennica Falk and Joakim Wigström, was an "Inter-Personal Awareness Device" (or IPAD for short, no relation to Apple's product!) Originally, the idea was to connect you with people who had a similar interest, so that you could for instance get a notification if somebody who liked the same movies or music was nearby. However, we realized that we could not build many devices (we only did 4 of the first version) so we changed tactics, which turned out to be a good thing. Instead of introducing you to strangers, the Hummingbird would tell you when your friends or colleagues were nearby. It worked by having a radio transceiver constantly send out a unique identity, and listening for other Hummingbirds at the same time. If another user was detected, their identity would turn up on the display, and the device would emit a low humming sound.
The idea was to give you a kind of "super-sense" - a background awareness if people were in the vicinity, even if they were in another room or another floor of a building entirely. We used it in a number of settings, including a rock festival, a work group and a big conference. It turned out that this "one-bit" piece of information - merely knowing if someone was nearby - could be both useful and comforting. There had been other location services before it, most notably the Active Badge developed by Cambridge University and others. However, the Hummingbird was different in that it gave you a constant sense of which other people were nearby, and it also worked without any kind of infrastructure, which meant that it could be used outside of an office or campus environment. You can read more about it in our paper Supporting Group Collaboration with Inter-Personal Awareness Devices. Also, Alexandra Weilenman did an interesting study of ski instructors using the Hummingbird, documented in her paper Negotiating Use: Making Sense of Mobile Technology.
Fast-forward to 15 years later, and at SXSWi, the issue of "ambient location" or "ambient awareness" was everywhere! A large number of apps were presented that were supposed to give you an indication of when interesting people were nearby, including Highlight, Glancee, Sonar and many more. Unlike check-in based apps such as Foursquare, these services run in the background of your phone and constantly look for other users nearby. However, rather than keep you in touch with your friends, the idea with most of them was to introduce you to new people - just as we originally intended with the Hummingbird, but later abandoned. The difference of course being that while we had to build hardware from scratch, these apps were merely a download away for standard smartphones.
So did it work? Apparently not, according to a number of reports afterwards! These apps all drew a lot of battery (a problem we encountered with the original Hummingbird), and seemed to provide very little added value. In particular, it seemed to me when I used them, that they were not good at giving motivation for actually getting in touch with anyone who popped up. "User X is within 500 meters of you and also likes music and books" is not really enough of a conversation starter, especially in a crowded party with hundreds of people around! The closest I got to communicating with somebody was some random messages that were sent to me by people I did not have much in common with - and by the time I saw the messages, I had no way of knowing if they were still nearby. Very soon, I prioritized keeping up with people I already knew through Whatsapp, SMS and Facebook, and uninstalled all the background apps to keep my battery alive a little longer.
There have been a number of suggestions on how to make these services more appealing, such as having a useful "single-player mode", but ultimately, I think these startups need to take a step back and re-consider what kind of value they are really providing. Introducing people to each other can be fun, but it is also very easy to step over the line and become creepy. More importantly, to just match people by what they "Like" on Facebook is a very crude approach, and we would need something a lot more sophisticated before I would approach a complete stranger based on an app's suggestions. As seen in our research with the music-sharing service Push!Music (which I will post about another time) it is not easy to make the "jump" from online communication to the real world. But I am sure the underlying intuition about ambient awareness is sound, and eventually somebody will get it right!
Upplagd av Lars Erik kl. 15:21 Inga kommentarer:

Transfer Scenarios: From lizards to robots 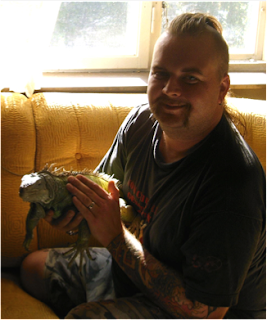 One important aspect of achieving grounded innovation is to manage the two dimensions of inquiry and invention. But how do you go about making inquiry about a product category that does not even exist yet? Sara Ljungblad developed the Transfer Scenarios method to do exactly that! The idea is that you look at an existing practice that is in some way analogous to the technology that you are interested in. You can find more about Transfer Scenarios in our article Transfer Scenarios: Grounding Innovation with Marginal Practices, and in Sara's Ph.D. thesis, Beyond Users: Grounding Technology in Experience.

For instance, in one project we were developing new forms of autonomous agents and robots. To get around peoples' preconceived notions of what a robot can do, we did a study on owners of unusual pets, such as snakes, spiders and lizards. These people have a very strong relationship to their pets, event though the animals themselves have a fairly low cognitive ability - much like robots! The idea was not to build new robotic pets, but to capture the essential qualities of the relationship and base new user experiences on that. For instance, a number of users were interested in developing new forms of patterns on lizards, and in interacting with other owners. This led to the idea of GlowBots, developed by Mattias Jacobsson and others. These are small robots that autonomously develop colorful and dynamic patterns, which in turn influence the robots around them. Users can interact with the robots by taking them up and shaking them! Shake the robot up and down to show that you like the pattern it is displaying; then it will set off to try and spread it to other robots. But if you shake it sideways, the robot will abandon the pattern it is currently working on and generate a new one, hopefully more pleasing. GlowBots generated a lot of press and were exhibited at several major events, including SIGGRAPH and Wired NextFest. The full story of GlowBots can be found in the article GlowBots: Designing and Implementing Engaging Human-Robot Interaction.

Amazon has just purchased Kiva Systems, the company that provides fully automated robotic warehouses. The deal is expected to bring more automation to Amazon's warehouses. Kiva's technology is remarkable because it shows how it is possible to have physical places that are completely run by digital principles! In a Kiva warehouse, the humans stand still while robots put away and fetch inventory as needed. In fact, no human can fully understand how the inventory a Kiva warehouse is organized, but it makes perfect sense for a computer. In the future, as more and more sensing makes it possible to track the everyday things around us, we can start to apply computation like this to the everyday world - perhaps one day doing a "Google search" for a lost sock in the bedroom!

In the book I talk about digital products that do no information processing of their own. For instance, an electronic subway card does not actually do any computation, but is still a digital product since it allows you to interact with a digital payment database.
An easy way to identify products has been to use visual codes, such as the classic barcodes that you see in supermarket checkout counters. However, I argue that barcodes have many disadvantages, and for many tasks they are not really necessary! Image recognition technologies are becoming so good, they can identify objects without any specific codes.
Case in point: Toshiba has developed a supermarket checkout counter that identifies fruits by sight - no barcode needed! While this is still an early system, it points the way to a near future when every object around us will be recognizable and potentially part of a digital system.
Upplagd av Lars Erik kl. 22:26 Inga kommentarer:

Look inside the book!

Grounded Innovation is now up for pre-order at Amazon, and you can get a sampling of the content by using the Look Inside feature!
Upplagd av Lars Erik kl. 21:35 Inga kommentarer: